By Christopher Caskey / The Citizen 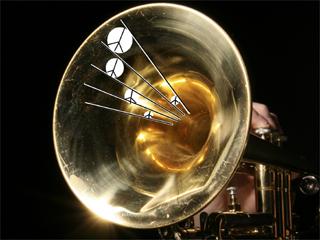 Jill Connor / The Citizen
The Jazz for Peace concert will star nationally renowned jazz musicians at the Auburn Public Theater.
A group of musicians who have never met or never played together can spontaneously create brand new tunes simply by listening and communicating with one another.

New York City jazz pianist and vocalist Rick DellaRatta is taking that spirit one step further. Through his group Jazz for Peace, DellaRatta has been supporting humanitarian causes through jazz music around the world.

Jazz for Peace will bring its sound and its cause to Auburn Saturday. The concert is the finale in a two-day series of events call Give Peace a Chance, sponsored by the local chapter of the American Red Cross, to encourage peace and understanding. The series will include a film screening, vendor show, multiple music events and lectures to encourage social responsibility.

The show is part of a series of benefit concerts DellaRatta has staged from New York to the West Coast to Denmark. The nationally-known musician was inspired after Sept. 11 to try and achieve progress and find common ground between people through music.

The name of the band, Jazz for Peace, comes from a poem DellaRatta wrote on the infamous day, said John De Angelis, an event coordinator with Jazz for Peace.

The poem was eventually set to music, and a few concerts were organized in New York. It expanded from there, De Angelis said.

“It just kept going and going,” he said. “There are literally thousands of people out there with dreams, and valid ones, to make this world a better place.”

But once the curtains open, the music is the main attraction. DellaRatta has played major jazz festivals around the world, and has opened for the legendary Dizzy Gillespie. He will perform Sunday with a full rhythm section and at least one horn, likely playing in a quartet or quintet.

DellaRatta plays a mix of standards and original compositions, and his work is often infused with Latin and Brazilian elements. Those influences will likely be on display this weekend, De Angelis said, as this will be the first concert DellaRatta plays after a trip to Brazil.

Susan Marteney, local director of the Red Cross, said organizers originally were looking only to stage the Jazz for Peace concert. But the event quickly grew from there, Marteney said, and could become an annual way for the organization to connect personal, community and global issues.

“We were looking at peace not just as an inner peace, but as a community peace and a global peace,” Marteney said.

What: Jazz for Peace

" Love to go but $60!!! how about $20 ???
The price of peace. "
REGISTRATION IS FREE.
Registered users sign in here:
Unregistered users can register here: